I’ve always felt there was something about the Lab that didn’t sit quite right with me which held me back from writing this post sooner. Investing in a HP MicroServer recently was a good move and having it set up as my vSphere host has definitely set things right in my eyes. I quite like my current set-up now.

I’ve mentioned my lab quite a few times on my blog but this is the first time I go into detail on its set-up. So here it goes…

I have VMware vSphere 5.0 running on my vSphere host as my hypervisor which currently has two guest Virtual Machines – Windows Server 2008 R2 and Ubuntu 11.10. I have an Active Directory domain set up on the Windows Server along with a Windows 7 deployment environment with MDT 2012 and Windows Deployment Services. On Ubuntu I have a FOG server (a Linux-based cloning solution) up and running which is mainly used for disaster recovery and backups (useful for image building in deployment scenarios as well as for personal use).

With regards to physical machines I have a Windows 8 PC which I use to administer the vSphere host using vSphere Client and for connecting to the Windows Server and Ubuntu VMs using Remote Desktop. There are also two spare computers in the lab for testing purposes, either for Windows 7 deployment or as client PC’s in my Active Directory domain.

The vSphere host, the Windows 8 PC and the two spare computers are all connected to an unmanaged Gigabit Ethernet Switch which isolates the Lab from the rest of the home broadband network. The broadband router provides IP addresses during normal use, but when the Windows Server is running the server takes over IP addressing duties for my Lab via DHCP without having to turn off the DHCP service on the router. I can have both running concurrently and have had no problems whatsoever.

Here’s a diagram of my network: 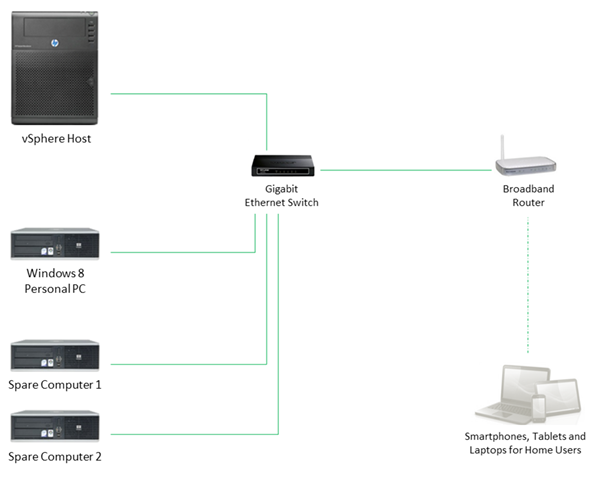 The two spare computers share a keyboard, mouse and a monitor between them using a hardware KVM switch. The Windows 8 PC has a dedicated monitor of it’s own but shares the keyboard and mouse with the spare computers via the KVM. The vSphere host is, of course, administered remotely and so is not connected to the KVM at all.

In my first attempt at explaining this with a diagram I got feedback from a friend that it was too complicated. So what I’m doing now is break it down further with two diagrams. The ESXi host has been left out since its not connected to the KVM.

To start off we have a Windows 8 PC with a dedicated monitor (the monitor is connected directly to the PC). The computer is connected to Port 1 on the KVM switch for the keyboard and mouse.

The Windows 8 PC always has access to the keyboard and mouse by default upon start up since it’s connected to Port 1 on the KVM. This means I can use it as normal for the most part.

It gets complicated with the two spare computers so let’s take the Windows 8 PC and the first monitor out of the picture to simplify things.

This set-up works quite well for me. I use the Windows 8 PC most of the time and do the bulk of my research and reading on this computer. When I want to use any of the spare computers I switch ports on the KVM which gives me access to the keyboard and mouse and a display on the second monitor.

Switching to use any of the spare computers, however, means the Windows 8 PC is no longer connected to the mouse and keyboard, though it does have a dedicated monitor. In this situation I either contend with switching ports using the KVM or sometimes use Microsoft’s Mouse Without Borders (a software KVM solution) depending on my needs. With Mouse Without Borders I can move the mouse pointer from one monitor to the monitor next to it by simply sliding the pointer off the screen and having it slide into view on the other monitor without any lag (in a similar fashion to a multi-monitor set-up).

The hardware KVM switch has the added benefit of being able to walk away from the Lab by simply switching to an unused port without having to worry about my twins interrupting something by bashing on the keyboard. Regrettably, the Lab currently sits in my bedroom for lack of space in my home.

I’ll post a picture once I can make some rearrangements to get a good angle for a photo.

4 thoughts on “My Lab at Home” 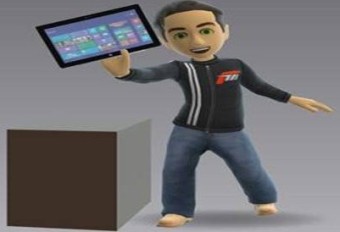